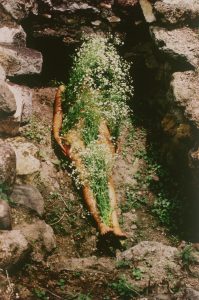 This seminar session will be a three-way conversation between artist Esther Ferrer, critic and historian Shelley Rice and the audience, and all of us will focus our attention on the life and work of Ana Mendieta. Students are required to see her exhibition at the Jeu de Paume Museum, which revolves around the artist’s short films, and formulate questions they might have about Ana’s experiences during the 1970s and 1980s as a Cuban American artist living in New York and working internationally. These questions should be written down and given to Rice and Ferrer, who will address the issues  through the lens of their own experiences during this particular historical moment. Ferrer is a Spanish feminist artist who has long lived in France, and Rice was a fellow-traveler and colleague of Mendieta’s in New York.  As a journalist and feminist during this period, Rice shared friends, concerns and political activism with Ana until her untimely death in 1985. Shelley will begin the discussion with a short slide presentation of works by both Mendieta and Ferrer to set the stage for the interactions that will follow, as the two older women talk about Mendieta’s art and the contours of life as a woman in the art world – local as well as global – almost 50 years ago. They will then attempt to answer the questions posed by young women curious about this important artist and her relevance for the sexual politics of the 21st century.

This session is organized in collaboration with the Jeu de Paume, Paris.

Esther Ferrer is a plastic artist and performer, since 1966, alone or within the Spanish group ZAJ. She has always favoured the ephemeral practice of art/action. Since the 1970s, she has devoted part of her activity to the visual arts, installations, photos, paintings based on the series of prime numbers, etc. She represented Spain at the Venice Biennale in 1999, received the National Prize for Plastic Arts of Spain 2008 and in 2014 the Velazquez Prize, and the MAV Prize (Mujeres en las Artes Visuales)… Ferrer has exhibited in numerous galleries, museums and fairs and has participated, as a performer, in many international festivals. Her last two exhibitions: All the variations include this one (Museo Centro de Arte Reina Sofía) – 2017 and Espacios entrelzados – ( Museo Gugenheim-Bilbao), 2018.

She is also the author of two radio plays.

Shelley Rice is an Arts Professor at New York University, with a joint appointment between the Photography and Imaging and the Art History Departments. She is the author of Parisian Views, the editor of Inverted Odysseys: Claude Cahun, Maya Deren, Cindy Sherman and the co-author of numerous books and catalogs like The Book of 101 Books, Paris et le Daguerreotype, Jacques Henri Lartigue: D’air et d’Eau and, most recently, ORLAN EN CAPITALES. Her essays have appeared in many publications, for instance Art in America, Artforum, The Art Newspaper, Bookforum, Aperture, Tate Papers, French Studies and Etudes Photographiques, and she has been both the featured blogger and a radiophonic talk show hostess for lemagazine.jeudepaume.org in Paris. Rice is the recipient of numerous awards, including a Guggenheim Fellowship, two Fulbright Grants (to France and Turkey), National Endowment for the Humanities and the Arts Awards, a Hasselblad Research Fellowship and the PEN/Jerard Award for Non-Fiction Essay. In 2010 she was named a Chevalier in the Order of Arts and Letters in France, and in 2015 she was awarded the David Payne Carter Award for Teaching Excellence from the Tisch School of the Arts at NYU.

This session is organized in partnership with the Jeu de Paume Museum (www.jeudepaume.org).