Since spring 2017, the Artl@s team has been working to really integrate images into its project on the world history of artistic circulations.

Thanks to our collaboration with Mathieu Aubry and his team at in Computer Vision at the École des Ponts–Paris Tech, LIGM Lab, we are currently automatizing our data harvest, and integrating images into our digital work.

Aubry’s project EnHerit (Enhancing Heritage Image Databases), which is financed by an Agence nationale pour la Recherche grand for young scholars (ANR-Jeunes), is developing new approaches and tools based on Deep Learning, and in particular Convolutional Neural Networks (CNNs), to suit the specific needs of art historians and scholars, and in particular leverage large scale visual databases with minimal annotations. The tools of EnHerit can identify recurring patterns in heterogeneous image databases, in particular parts of artworks that have been copied from other artists [Ginosar 2018; Shen 2019]. These tools also create graphs that show influence between different artworks and painters. The manual identification of such parallels and borrowings is an extremely arduous and time-consuming process, even when carried out on small scales. However, with digital tools such as those developed by EnHerit, it is possible to carry out such identification in a very short time and across vast corpora.

The collaboration between Artl@s and EnHerit, entitled ImageContagion, aims to group images according not only to their visual proximity with one another, but also according to their spatiotemporal and semantic proximities. 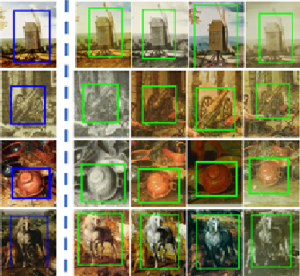 Detection example with EnHerit’s trained features on a Brueghel dataset. Shows the top 4 matches (in green) for one example of query from each of 4 annotated categories. Match styles can be different from the one of the query. Source : SHEN, Xi, and AUBRY, Mathieu, “Discovering Visusal Patterns in Art Collections with Spatially-consistent Feature Learning”, Paper submitted to CVPR2019 (Thirtieth IEEE/CVF Conference on Computer Vision and Pattern Recognition).