All the sessions will also take place online. Please register here, to get access to the meeting links and passwords.

Within the framework of the Artl@s project, founded in 2009 by Béatrice Joyeux-Prunel, this annual seminar aims at analyzing the logics of artistic and visual globalization. After exploring the Arab world, the Southern Biennials and Asia, it will study artistic circulations in, from and to Northern Europe in the contemporary era, thanks to the invitation of specialists – researchers and curators. The seminar will take place on Mondays, every two weeks, and will alternate between two types of sessions: guest sessions and the “Artl@s Lab”, which will allow students to familiarize themselves with digital cartography in art history, and with BasArt – a digital database of catalogs of living art exhibitions and fairs since the end of the 19th century, with a cartographic and statistical interface. The seminars are part of a more general activity of international colloquia and publications, notably via the Artl@s-Bulletin (a multilingual, peer-reviewed journal).

The seminar can be validated within the framework of the PSL “Transnational History” and “Digital Humanities” masters programs (ENC-ENS). Integrated in the models of the ATP Masters in Transnational History, it allows for the DENS to validate “collective research experience” type validations. 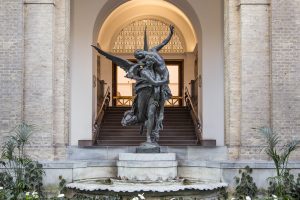 This presentation addresses the challenge that nationalist memory politics has posed to European and American societies in modern history through a study of the global influence of Antonin Mercié’s Gloria Victis (c. 1873) on the practice of erecting monuments to defeat. Originally created as a monument to the loss of the Franco-Prussian War, Gloria Victis widely inspired the visual language of commemorating defeat at the turn-of-the-twentieth century, influencing monuments dedicated to events including Denmark’s Second Schleswig War, the US Civil War, the First Serbian Uprising, and the Second Boer War. Today, the symbolism of Gloria Victis has reemerged as a powerful symbol in Eastern Europe’s post-Soviet memory wars, especially within the propaganda of the populist Right. In 2006, future-PM Viktor Orbán of Hungary’s right-wing Fidesz party officiated the unveiling of Csömör’s monument to the international victims of Communism, Gloria Victis. This presentation therefore aims to trace the history of “Gloria Victis” symbols in public spaces as a means of better understanding the problem of nationalist pseudo-histories and Lost Cause narratives in public discourse today.

Nicholas Parkinson is a Novo Nordisk Mads Øvlisen Postdoctoral Fellow at the Ny Carlsberg Glyptotek in Copenhagen, Denmark, whose research examines the influence of politics and institutions on shaping art historical knowledge. His upcoming article “‘The Rayonnement of our Ideals’: French, German, and Nordic Painting in fin-de-siècle France,” will appear in the multi-author publication Mapping Impressionist Painting in Transnational Contexts (Emily Burns & Alice Price, eds) in 2021.

The North –Ultima Thule– has for centuries been regarded as remote and mysterious place of danger. In for example old maps, it is depicted as surrounded by monsters and other horrors. The proto-Romantics and Romantics of the 18thand 19thcentury seem to have had a particular fascination for the North, sparkled by the cultivation of the sublime in nature as an aesthetic ideal.

The Norwegian painter Peder Balke was one of the first artists who ventured to the Northernmost parts of Scandinavia. In 1832 he set out on a journey that took him above the Arctic circle, all the way to the North Cape. The image of the desolate, Arctic nature came to haunt the artist for the rest of his life. Balke later studied with his fellow Norwegian, Johan Christian Dahl, in Dresden, where he also was impressed by the paintings of the German Romantic Caspar David Friedrich. A stay in Paris in the 1840s lead to an important commission from Louis-Philippe, King of the French.

Balke’s ideas of the Northern nature was formed by European Romanticism, but eventually he developed his own, highly experimental manner of depicting this landscape 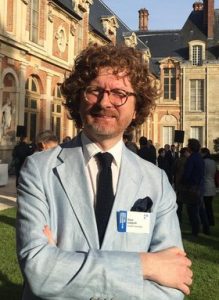 Biography : Dr Knut Ljøgodt is a Norwegian art historian and the director of Nordic Institute of Art. He studied art history at the University of Oslo, Courtauld Institute of Art, London and Istituto di Norvegia in Roma. Dr Ljøgodt has been a curator in the National Gallery, Oslo, director of Northern Norway Art Museum, Tromsø, as well as founding director of Kunsthall Svalbard in Spitzbergen in the Arctic.

Knut Ljøgodt is a scholar on Scandinavian and European 19thcentury art, including Nordic Romantic landscape painting. He has published extensively within this field, and has curated and co-curated a number of exhibitions, including Peder Balke(National Gallery, London 2014), Histories: Three Generations of Sámi Artists(Queen’s Gallery, Royal Palace, Oslo 2018), andEdward Burne-Jones: The Pre-Raphaelites and the North(Prins Eugens Waldemarsudde, Stockholm 2019 and KODE Art Museums and Composer Homers, Bergen 2020). Ljøgodt’s latest publication is Peder Balke: Sublime North (Skira, Milan 2020), and he is presently working on the catalogue raisonné of this artist.

November 23, 2020: Circulation of artists between Stockholm and Paris around 1700 (Linda Hinners, Nationalmuseum, Stockholm) 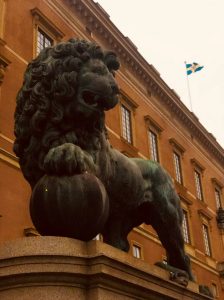 The paper treats French sculptors and painters active around 1700 at the building project of the Royal Palace of Stockholm. They were recruited from Paris by the architect Nicodemus Tessin the Younger (1654-1728),  assisted by his  “agent” in Paris , the diplomatic envoy  Daniel Cronström (1655-1719). My research focused on the craftsmen’s French background as well as their journey and stay in Stockholm.  Through detailed archival studies it was possible to clarify heir professional roles within a social context.

In France these artists were still part of the guild system. These sculptors, painters, casters, gold-smiths, gilders are better described as  artisans (“ouvriers”) rather than “artists” in the modern sense of the word ( i.e. great individual creators of original works of art).  None of them were members of the Académie Royale de Peinture et de Sculpture but however they worked for the Bâtiments du Roi at some of the greatest royal building projects at the time, such as the Trianon and the Invalides. Thus, they were both dependent of an old tradition (the Guild), where the collective work in the workshop was important,  and involved in modern organization and a process changing the conception of the role of  the artist. In my research I studied the Frenchmen’s working conditions, the organization of the work and their status within these professions at this time. To a large extent it is a study about the social identity of the craftsmen/artist and the opportunities they had to influence and develop this at a time when a modern artist’s role is not yet established. My conclusion was that the French artists/artisans, a very homogenous group, played an important role in the reorganization of the Swedish royal and public building projects.  Besides, in Sweden they had a possibility to improve their career by more demanding commissions. They all enjoyed royal pensions, which they had not had in France. Thus, questions open in turn to larger themes in the field of the early modern artist’s professional roles, possible work and career paths, and  work organization in relation to the societal context in which they appeared in.

The artisans who travelled to Sweden in the 1690’s constituted of a group of 15 sculptors, painters and founders, and were often accompanied by family-members. The mobility of these artists/artisans is both geographical and social. By travelling to Sweden these artists wished to improve their professional and economical status.  At the same time,  by recruiting French specialized courtly craftsmen, the Swedish patron (the King through Tessin) wished to manifest the political power by conspicuous consumption. Inspired by the way that the Bâtiments du Roi organized all state building projects, a similar centralized organization was created in Sweden, Överintendentsämbetet, with Tessin as the first “Surintendant” in 1697. The idea of this state art patronage was to transfer the artistic and cultural know-how of the French to the Swedes, thus a form of art mercantilism. 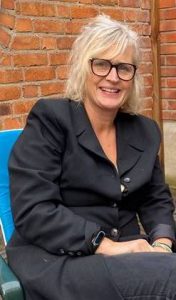 Linda Hinners is senior curator at Nationalmuseum in Stockholm, specialized in sculpture. She has curated various exhibitions, for example on Auguste Rodin and the Nordic countries in 2015 (collaboration with Ateneum Art Museum, Helsinki). Her doctoral thesis dealt with French decorative artists who worked at the Royal Palace in Stockholm ca 1700. Hinners is currently directing a project concerning Nordic women sculptors which will result in an exhibition and a publication.

“From mobility to stability and a new mobility. French. The Flow of Sculptors to and from Sweden from the Late Seventeenth to the early Nineteenth century”, in Sculpture and the Nordic Region, eds. Sara Ayres and Elettra Carbone, Ashgate (2016)

This paper presents preliminary results from an empirical study that investigated and documented transnational connections of c. 700 Swedish artist born between 1875 and 1895, i.e. artists whose professional careers coincided with what has been described as the modernist breakthrough in Swedish art. This quantitative study evidence the extent to which artistic life was permeated by travel and transnational exchange and reveals clear patterns of Swedish artistic mobility in the early 20thcentury, but also indicates different forms of and reasons for mobility (artistic training, professional appointments and collaborations, seasonal migration, voluntary exile, et cetera). The data collected documents travels to and/or exhibitions in nearly 60 different countries on all continents. Unsurprisingly, next to 70 percent of the artists travelled to, or through, Paris and/or France. However, transnational mobility within Europe was almost as strongly directed towards Denmark, Germany and Italy. Transcontinental mobility was particularly prominent in relation the US and North Africa.

Due to the strong focus in Swedish art historiography on Paris as a compulsory passage point for aspiring modern artists, these diverse travelling patterns—and thus presumably also professional networks and artistic practices—have been overlooked or reduced to marginal episodes of lesser interest, despite the fact that many artists travelled widely. Empirical research conducted with quantitative methods contradict the established history of Swedish modern art and call for critical revisions. Without questioning the importance of Paris as an artistic node, the paper reflects upon the discrepancy between dominant tropes in art history and the decidedly varied transnational connections of Swedish modern artists. It also address the possibilities and limitations with the quantitative research method as such.

May 17-18, 2021: Symposium “Paris as key junction in the Swedish-Baltic Realm”, Swedish Institute